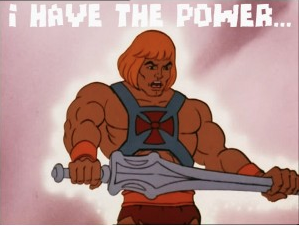 As I have a vested interest in consistent electricity back home (see my other recent post on Solar for details) and have been in discussion with the council about net metering and grid tie, I’ve been doing quite a bit of random reading regarding electricity distribution and its various facets.

Not many of us know that the power company / municipality also uses in-line signalling (aka ripple control) to implement power control and load shedding, so I thought I’d do a little writeup on that.

Many of us have noticed that streetlights don’t always come on, or go off when its light or dark – they appear to be on a timer system.

What most people don’t know is that the timer system controls are actually implemented centrally at substations, and these add signals to the power lines to tell the equipment to turn off / on when instructed.

With ripple control, a small signal is added to the incoming A/C at a distribution location – eg a substation. This signal is read by a special relay in place on the larger circuits (typically the Geyser), and turns power off or on when the electricity company requires – usually when power is scarce, and they need to shed some load.

As this signalling can work on multiple channels, each listening relay can be set to listen to a specific channel, and used to power specific things on / off remotely (e.g. Streetlights).

In South Africa, we use DECABIT signalling to tell things to turn off and on, as well as the older K22 signalling standard.

When load shedding needs to occur, the electricity distribution system needs to act fast to avoid system failures. Most things are automated, and happen in order of timing.

Implementations of the protection mechanisms in place have a specific time to occur – eg a latency. Responses to conditions also have a latency – eg getting additional idle power plants online to provide more power when needed, so its important to the grid to have multiple control and response mechanisms to respond to loads. Each response mechanism also has a different cost impact, so its also important to the electricity provider to best manage these.

A diagram of this is below (Excerpted from http://www.anime-za.net/tech/literature/Enermet_Farad.pdf ): 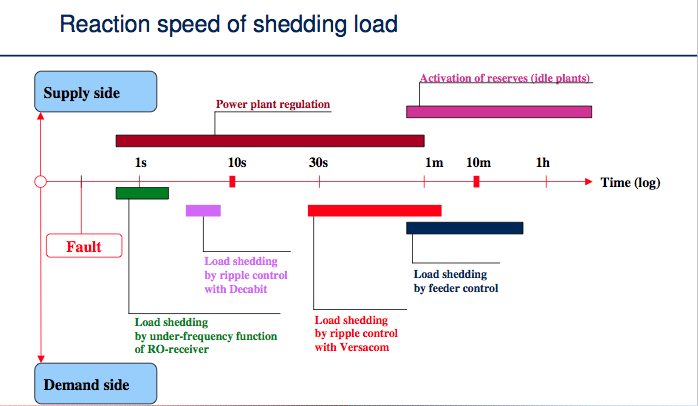 For light variances in load, frequency changes as generators speed up or slow down to supply enough electricity to the supply. If there isn’t enough supply to meet load, then frequency drops, and large scale equipment will disconnect until load decreases. This happens almost instantaneously – responses to these issues resolve with a latency of within a few milliseconds to a second. This is called Under-Frequency Load Shedding (UFLS). 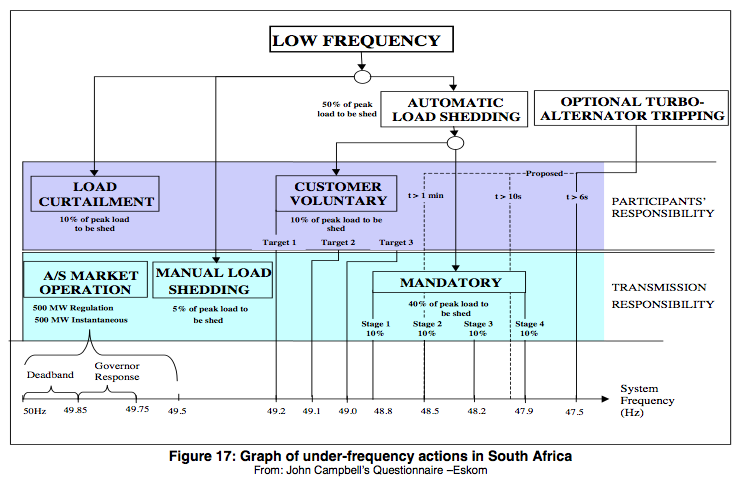 As seen in the diagram above Eskom implements automated under frequency load shedding in an increasing percentage margin based off frequency rates.

(Additional details are in the PDF below)

The next set of load shedding is the one we’re interested in – ripple signalling. If the system still has too much load after 1 second, then it sends out a signal over DECABIT to turn off more equipment. DECABIT signalling has a latency of about 7 seconds – a minimum DECABIT signal frame is 6.6 seconds, so this is a second stage response to issues.

As each substation can be connected to up to 20,000 homes/customers (depending on substation load capacity), this allows localized load shedding where its needed, when its needed.

Eskom calls this Demand Market Participation, and has roughly 800MW of systems added into this mechanism. Municipalities are particularly keen on putting loads onto these mechanisms via DECABIT compliant relays, as this saves them peak power fee’s when loads are high – if they can temporarily cut off power to consumers for 10 seconds – 10 minutes for non-essential high loads, then they can substantially reduce what power costs them from Eskom, and make additional profits.

A good writeup on Demand Market Participation is below:

Eskom benefits as they can temporarily avoid adding more infrastructure to cope with growth.

This has been the case for a few years now, but it only delays the inevitable – you do need to invest in infrastructure, not incentivize clients to use less.

Eskom also has a secondary mechanism (using the same theory – lets encourage you to turn off power) called VPS. They have an additional 50,000MW of connections using this on a contractual basis – typically industrial users., and are looking to increase this number.

Its only been through introduction of these mechanisms that we’ve been able to stave off grid collapse. Its gotten so bad, that industrial users have been looking closely at what they can do to provide their own power when Eskom can’t.

Other countries – notably Germany, and the UK, have allowed consumers to become producers, by encouraging localized small scale production of electricity, thus helping the grid without requiring additional investment from the incumbents. This is called net metering – where both inputs and outputs are metered.

Eg – if you have a solar system that provides excess power during the day, it can feed into the grid – (when it needs it most), and they’ll credit you for your participation.

So far, South Africa has been rather reticent to implement this, as the short sighted vision is that its “stealing” from the incumbents profits.

A choice excerpt from that PDF is this –

Residential load can also be incorporated within the VPS, particularly when integrated with Smart Metering systems. Numerous pilot and small scale projects are being undertaken within both Municipalities and Eskom in response to the DOE’s Regulation 773 of 18 July 2008.

The Department of Energies regulation can be found here –

These state that all systems over a certain size require that smart metering be installed by 2012. As you may have guessed, quite a few municipalities have not met this deadline, and Eskom has been dragging its feet on that too.

Ironically, introduction of smart metering would actually help the grid here in South Africa, as IPP’s (independant power producers) would make the grid more stable by providing additional energy when needed, and at a lower cost than the incumbents can create it for.

This however does have its issues – most municipalities generate revenues from Electricity, and so are loath to change the status quo, even when it would benefit the country from a whole.

So, its unlikely to be implemented in the short-medium term, unless the government drags them kicking and screaming through the process. 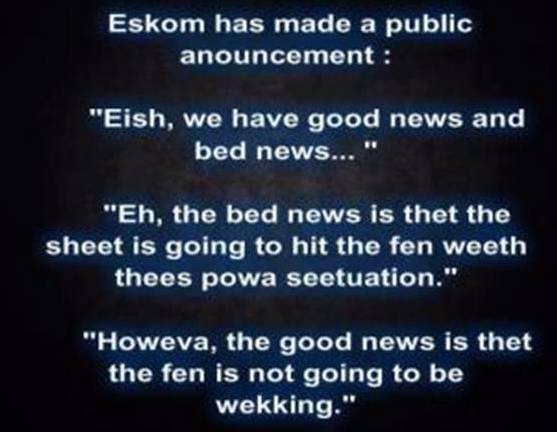 Thesis on the financial implications of relaxing frequency control as a mechanism.