As Eskom has again gone down the load shedding route, and it looks like there won’t be much respite until Medupi et al come online, I thought I’d look at how to take my grid-tied setup to the next level, and incorporate off-grid + batteries so that we have power when the rest of the suburb does not.

I haven’t done that so far, as thats by far the most expensive part of going off-grid!

A flash file explaining a possible setup below:

There are a number of issues to deal with first.

Currently we have a grid-tied PV inverter. This expects power to be present before it supplies power from the solar panels to our house (G83 / G59 standards as per NERSA specs etc). When power goes out from Eskom, then the inverter cuts off as well (by design). What that effectively means, is that when Eskom goes off, we go off, even though daytime we could still be running off the panels.

Eskom obviously doesn’t want you feeding back into their grid when its off. With the above setup, there is nothing stopping the battery inverter system from feeding back out . Thats a no-no!
This is important to follow for 2 reasons.

First, and most importantly – safety. If a lineman is doing maintenance, its better not to try to electrocute them!
Second, you don’t want your house setup to be attempting to supply the neighbourhood with power when Eskom is offline, as its quickly going to run out!

So, we need another device to sit in front of the meter that will turn off a relay to stop power going outbound if Eskom has no power, and turn it back on when Eskom is back online to allow it again. Those devices are typically called ATS’s (Automatic Transfer Switches), and are useful to prevent anti-islanding (feeding back into the grid when the grid is off).

To further complicate things, I have a 3 phase system.
Luckily ATS’s come in 3 phase varieties, and aren’t super expensive.

Having 3 phase means I need to consider whether I want a full 3 phase setup, or I can wing it with a battery inverter setup on 1 phase only to provide emergency power.

If I go the 3 phase route, then I can charge the system from solar even when Eskom is down, and I’ll have longer runtimes. This is obviously the best choice from a provisioning perspective. Costwise – not so much!

That issue is described in much better detail here.

If I go single phase, then I can’t charge the system from solar when Eskom is down as the PV inverter will also be off, but I can keep one phase alive and running from batteries until Eskom deigns to do its job.
Single phase diagram (assume my inverter is 3 phase, image is snarfed from here) 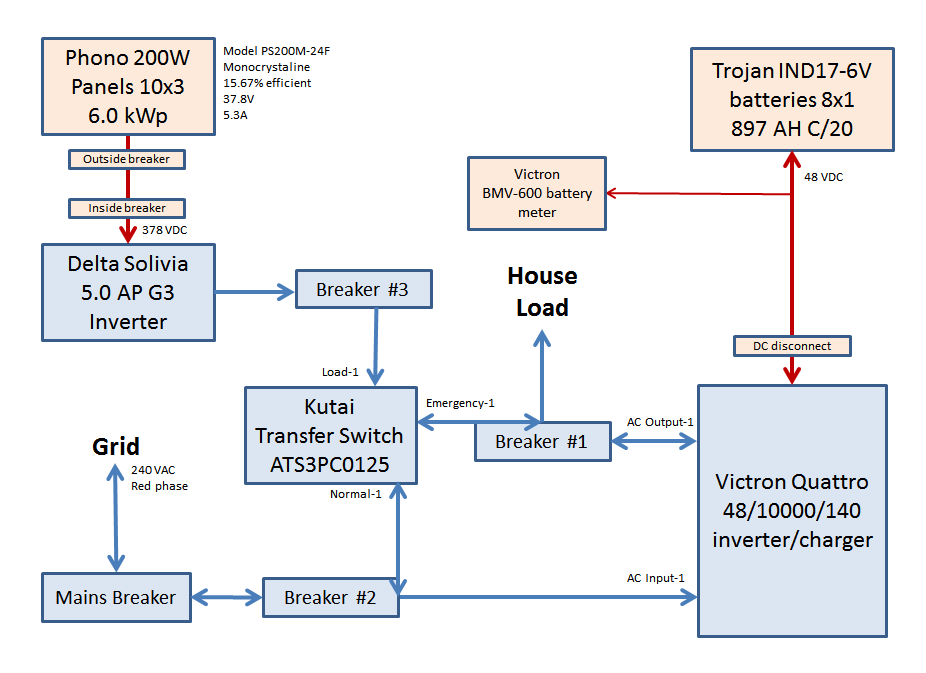 Obviously I would like to go the 3 phase route, but that means 3 x the cost in inverters, as there don’t seem to be 3 phase inverter chargers at the consumer level in the market yet! (pocket goes ouch, and thats before I even look at batteries!).

Those who’ve read this far, may be wondering why I didn’t get a hybrid grid-tied inverter / charger in the first place, instead of sticking more stuff in front of my existing setup.
2 main reasons.
Cost, and uh cost.

Seriously – the 3 phase hybrid solutions are in the R400K and up range!

Now I’ve explained some of the pitfalls, I’ll look at some of the solutions (to be expanded as I continue my research)

ATS Switches
Comap Mainspro. $$ – This comes in a 3 phase and single phase switch setup, and can switch over automatically to prevent outage. I’d use one of these to prevent Eskom getting power, and also to switch inputs when the power goes off before any of our devices noticed there was an issue
http://www.comap.cz/products/detail/mainspro/

ATS4BC0100. $ – This comes in a 3 phase switch setup (or single), and can be programmed to switch over as appropriate to inverter or mains to remove Eskom similar to the Comap.
ats100-brochure-en

Charger Inverters
Magnum’s MS-PAE does AC coupled grid tie, but they do the aforementioned sillyness in turning off the PV inverter when their battery setup is full.
Other options.
Outback
Victron Quattro
Studer Extender series +