The Tesla PowerWall is finally becoming available in South Africa, so I thought I’d do some “30% for math” calculations to work out payback periods.

This post is mostly inspired by the comments here – http://mybroadband.co.za/news/energy/154888-here-are-the-tesla-powerwall-systems-you-can-buy-in-south-africa.html

Thanks to MacAfrican for the criticism in my comments, otherwise I’d be too lazy to do this post 🙂

Predicted cost at the moment for a daily use PowerWall is $4000.
Rand is currently hovering at R16 (lets hope Zuma doesn’t open his mouth in the near future, as that historically has lead to large drops in Rand values).

Does it make sense / cents to buy one?

Lets have a look. First up we need to try to work out total lifetime costs.

The warranty for the Tesla on the NaturalSolar.com.au site indicates this

Thats interesting, as it now gives us an indication of cycle usage.
From that, I can infer that each year we’ll see a drop of around 5% in capacity.

With that in mind, we can do some math!

I’ve made a basic spreadsheet using those figures and worked out payback periods for the units.

I can’t predict Eskom pricing, so I’ve gone with current CoCT pricing per KW, and worked with annual % increase’s.
Total lifetime I’ve kept to 15 years, although you could probably scrape another year or two out of the units. I expect battery replacements to at least have halved in current Rand / Dollar terms in 10 years though, so replacement should be cheaper assuming Zuma doesn’t do any more Nene’s..

Below is what it looks like for a 5% annual increase 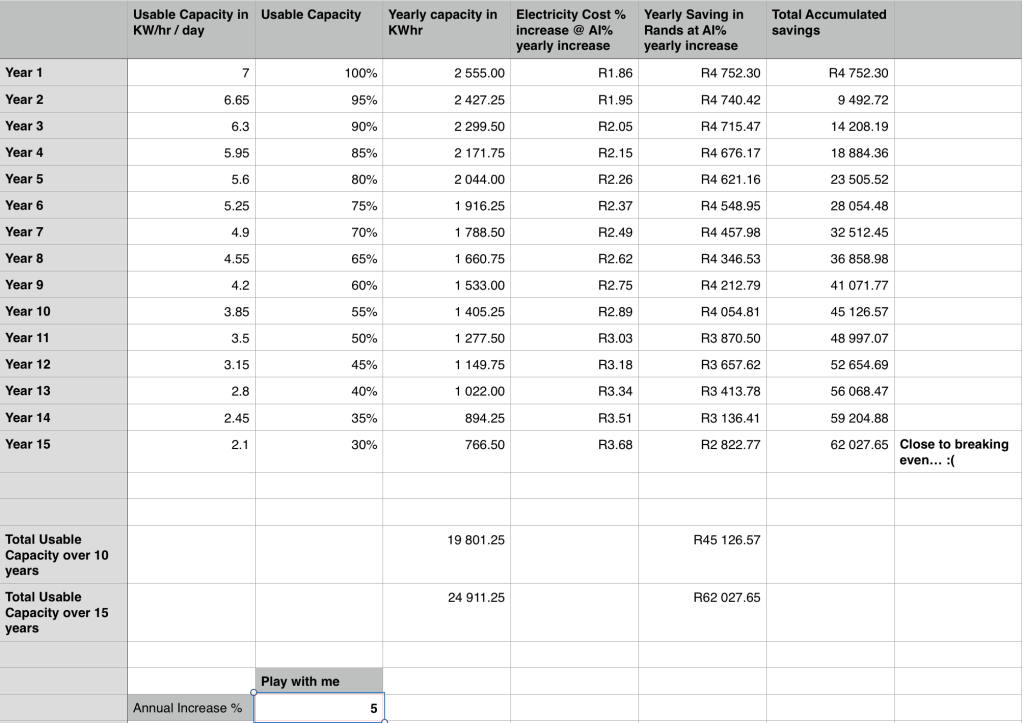 You’ll see that it currently doesn’t make sense to use a PowerWall at a yearly 5% increase, even at a 15 year time frame. It comes close, but no cigar.. 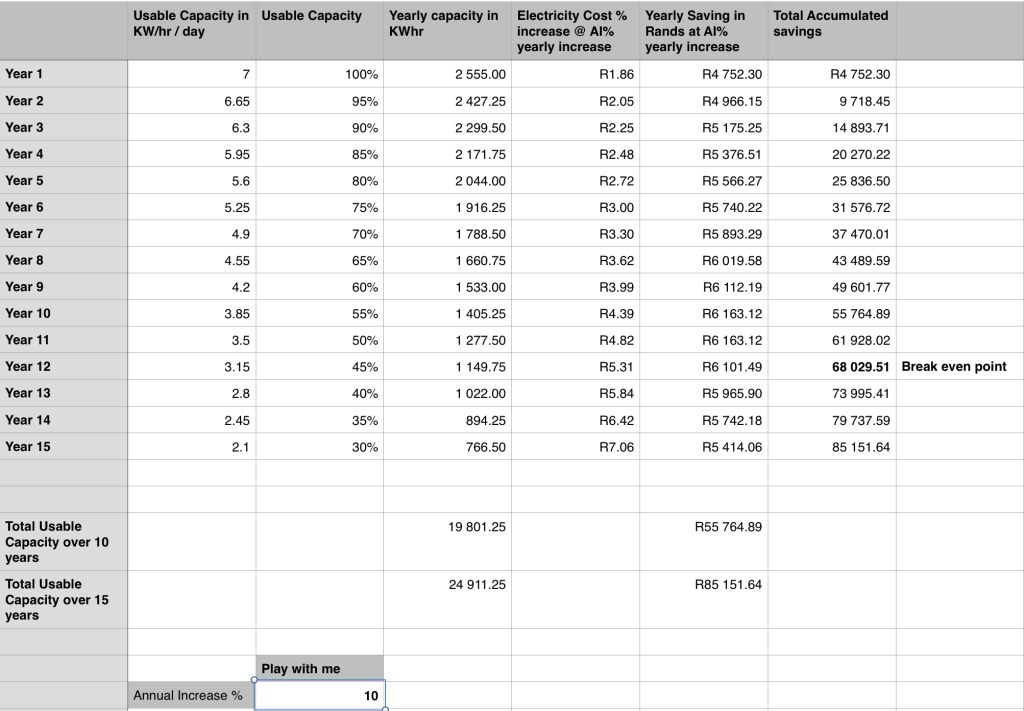 At a 10% annual increase (which might be closer to what Eskom pricing will eventually be than at 5%), we see breakeven in the 12th year of ownership. By 15 years we’re safely into profit. 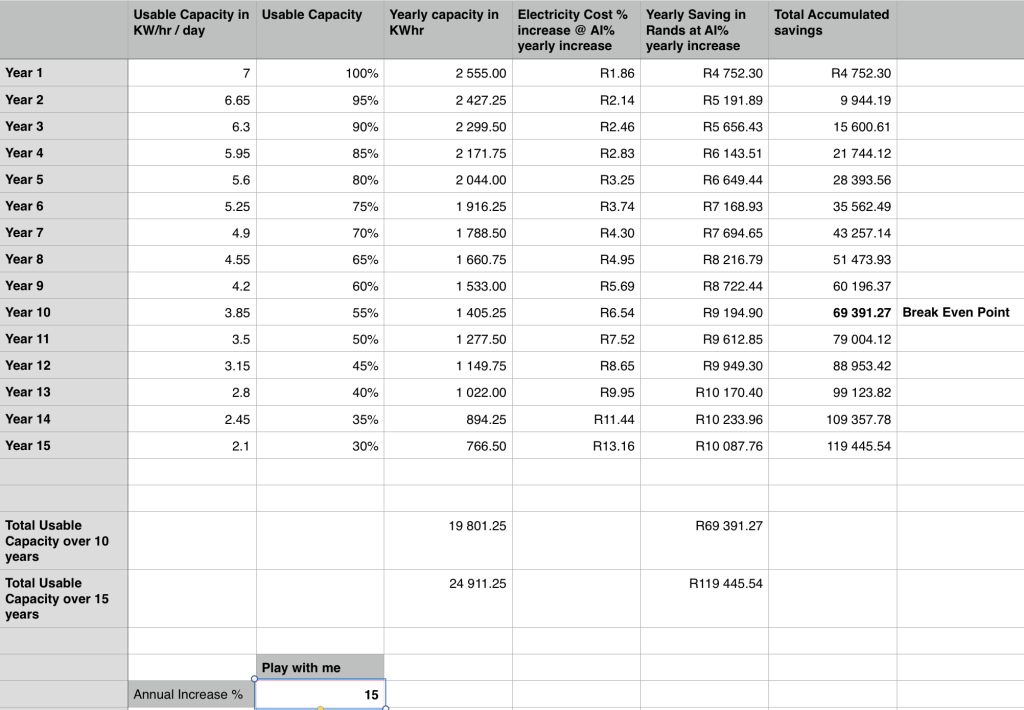 Feel free to play around with the values, I’ve uploaded the Numbers file here (as I’m a larney Mac user), or as an Excel sheet here.

In other news, am fully expecting Rich from HomeBug to critique this, hehe 😉

Some points to note:

The Rand Dollar rate is going to be the main cost influence on whether the PowerWall makes sense. If the rand drops further (and the indications are that it will), then it doesn’t make sense at R20/ dollar. If by some miracle the rand recovers to say R14 or R12 to the dollar, buying a PowerWall is a no-brainer.

NERSA approved increases may or may not beat my guesstimates. Historically we’re much more expensive per KW than 10 years ago by a large factor, so its likely that a moderate value of 10% increase per annum is going to correlate with actual figures. This will also increase once Eskom/ Muni’s introduce further daily connection fee’s and other non tariff increases on top of per KW pricing.
(Actual historical figures can be found here – http://www.eskom.co.za/CustomerCare/TariffsAndCharges/Pages/Tariff_History.aspx )

I don’t calculate round trip values for Electricity in /out of the PowerWall. Tesla documentation indicates that this is 92%, so final KW generation figures probably should be discounted by 8% for further accuracy.

I also assume you’ll be generating electricity to go into the unit from a solar install. Costs for that are not included, as we are looking purely at the viability of the PowerWall. While I can do full system calculations, its already clear that Solar generation is already cheaper than Eskom in South Africa, and has been for a few years no. Rehashing that again is of no interest to me.